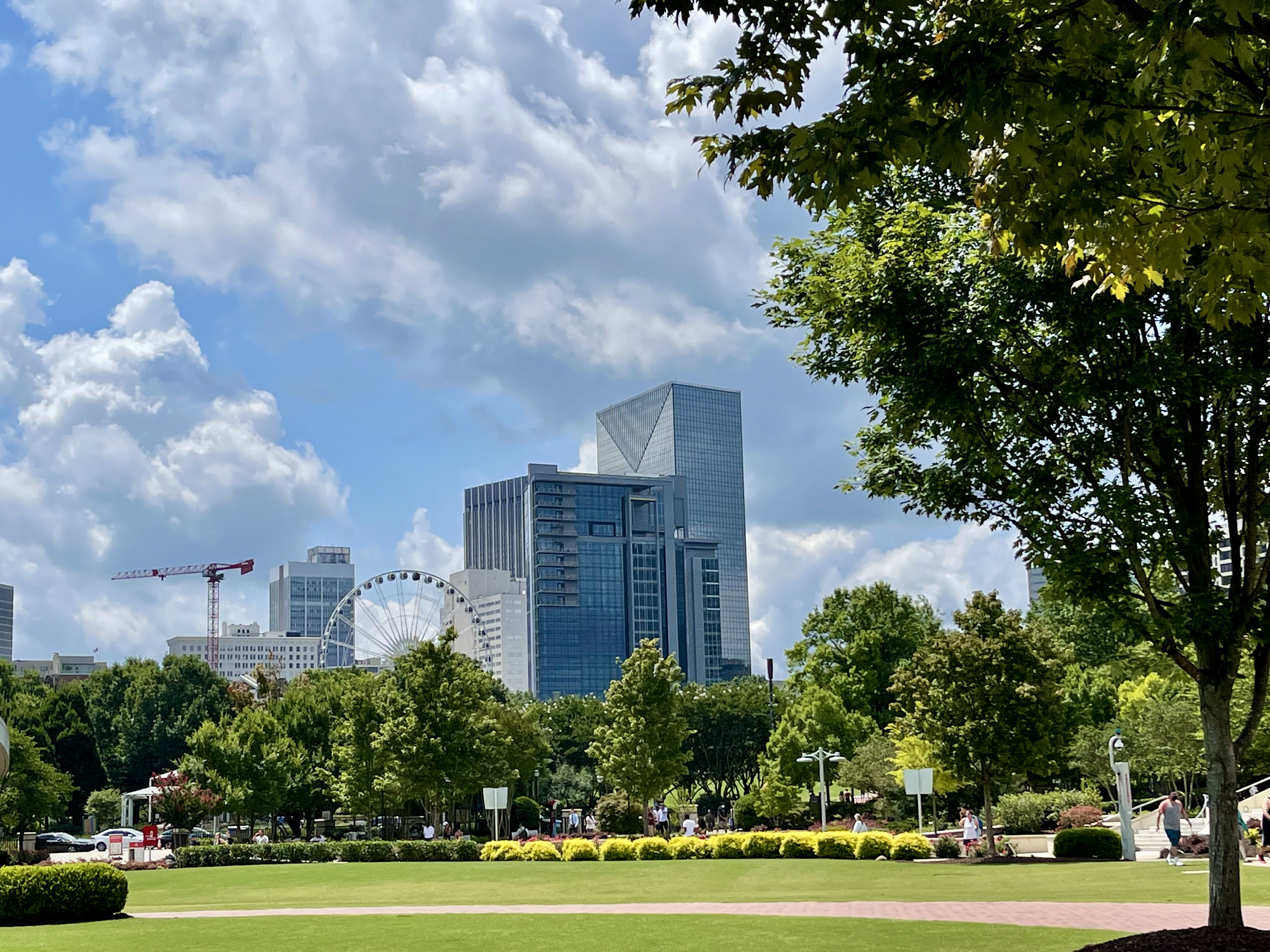 In the heart of Downtown Atlanta, you'll find Centennial Olympic Park, a 22-acre greenspace buzzing with entertainment. Both the park and the area immediately surrounding it are often referred to simply as Centennial Park by locals. Nowhere else can you jump on a towering 200-foot Ferris wheel or join 71,000 fellow Atlanta United fans for a match without ever leaving your neighborhood. But it wasn't always this way.

This area of Atlanta has a humble history. For years, it was simply a patchwork quilt of parking lots and empty buildings, but the 1996 Summer Olympic Games changed it all. Originally built for visitors and spectators of the Olympics, Centennial Olympic Park continues to be a popular gathering spot to this day, with many residential complexes and restaurants having cropped up all around it. In Centennial Olympic Park, you'll find an amphitheater, a playground, a splash pad, a visitor's center, several water features, sidewalks for runners, walkers, and joggers, plus plenty of space for outdoor concerts and community events. Many of the lofts, condos, and apartments in this neighborhood offer views of Centennial Olympic Park's lawns, landmarks, walking paths, and bustling activity below. With its proximity to Downtown, Centennial Park is a desirable neighborhood among young professionals.

There are two MARTA (Metropolitan Atlanta Rapid Transit Authority) train stations in the neighborhood. The MARTA rail stations are Dome/Georgia World Congress Center/Phillips Arena/CNN Center and Peachtree Center, both of which are a quick 5-10 minute walk to/from the hood. You can also take the Atlanta Streetcar, which currently runs a route from the Martin Luther King Jr. National Historic Site to Centennial Olympic Park, with ten stops along the way.

The Centennial Park area is a prime location for pedestrian traffic. Sidewalks around here are plentiful thanks to this being a part of Atlanta's main business and tourism district. Of course, the Centennial Olympic Park itself also offers paths for recreational walking and jogging.

As with most neighborhoods in Atlanta, a car is the simplest way to get around if you're traveling any distance. With plenty of street and public parking lots around Centennial Park, finding a spot for your car isn't usually a problem. From this neighborhood, it's easy to access all of Atlanta's major thoroughfares, including Georgia 400, I-75, I-85, I-20, and I-285.

There are plenty of restaurants in the Centennial Park area, and most are located within walking distance of the park itself. CNN Center offers several large chains and fast-casual restaurants, perfect for grab-and-go before concerts and events at nearby State Farm Arena.

Locally-owned favorites line Marietta Street, one of the neighborhood's arteries. This unofficial restaurant row makes it easy to grab a drink at one spot, dinner at another, and late-night drinks at yet another, all on foot. Stats Brewpub is a sports bar with 70 televisions for supporting the home team that also happens to brew their own beer. Watering hole Der Biergarten is a twist on the traditional German beer garden where you can get brats and pretzels alongside your brew. The Glenn Hotel's rooftop bar offers sweeping city views with a sophisticated vibe. To satisfy your sweet tooth, head to The Yard Milkshake Bar, where 44 flavors of ice cream, including vegan and dairy-free options, create Instagram-worthy milkshakes.

Since Centennial Park is wedged near the center of Atlanta’s business district, you’ll need to venture to other neighborhoods for your everyday grocery shopping. At Atlantic Station, just down Marietta Street, there is a Publix as well as a Target for any necessities. Trader Joe’s or Whole Foods in Midtown are other options, as is the Beltline Kroger.

Shopping isn't the main attraction in Centennial Park. But, shoppers don't have to go far for retail therapy. Prominent shopping destinations can be found in nearby Ponce City Market, Westside Provisions District, and Atlantic Station.

Ponce City Market, Atlanta's version of NYC's famed Chelsea Market, is located on Ponce de Leon Avenue. The expansive retail and food hall features over 60 shops and restaurants. It's one of the main sites along the BeltLine, Atlanta's former train corridor transformed into biking and walking paths. PCM, as it's called by locals, also hosts a weekend Farmer's Market. There are loads of stores ranging from local spots like Citizen Supply and name brands like Madewell.

Westside Provisions District (WSPD) is anchored by Atlanta menswear store Sid Mashburn and is also home furniture stores Serena and Lily and Room and Board, as well as several other shops. Anthropologie has an outpost here, too. What started in 2008 as a few unsuspecting buildings housing boutiques and eateries now spans more than 261,800 square feet covering over 10 acres.

Nearby, twenty-four stores are tenants at Atlantic Station. Shops include national chains such as Athleta and Target but also Atlanta-specific retailers such as Fab'rik. Free 2-hour parking is available in the parking deck, making Atlantic Station a great destination for in-town shopping.

If you are a seer and a doer, you'll love all that Centennial Park has to offer, most of which is centered around Pemberton Place. Pemberton Place is the convergence of Centennial Olympic Park, The Georgia Aquarium, The World of Coca-Cola, and The National Center for Civil and Human Rights. The Georgia Aquarium is the third largest aquarium in the world, and thousands of marine life live amid 10 million gallons of salt and freshwater. At the World of Coca-Cola, visitors can learn the story of Atlanta's famous beverage while sipping on various Coca-Cola concoctions from around the world. Rounding out Pemberton Place is the National Center for Civil and Human Rights, where interactive exhibits transport visitors and artifacts are on display.

Other interesting sites in the neighborhood include the College Football Hall of Fame, a museum filled with fun for college football enthusiasts, the CNN Center where budding reporters can tour the CNN studios, and the Children's Museum of Atlanta, a hands-on museum for kids of all ages. SkyView Atlanta, a Ferris wheel featuring 42 climate-controlled gondolas, overlooks the park and offers 360-degree views of the city.

One of the most iconic spots in Centennial Park is the Tabernacle. Completed in 1910, the church turned concert venue hosts more than 200 events annually. The acoustics and intimate setting make it a local favorite to take in live music.

Centennial Park is nearby Georgia State University and Georgia Tech. Thanks to the two MARTA stations, students can also quickly get to and from other in-town universities, including Agnes Scott College, Clark Atlanta University, Emory University, Morehouse College, SCAD, Spelman College, and more.