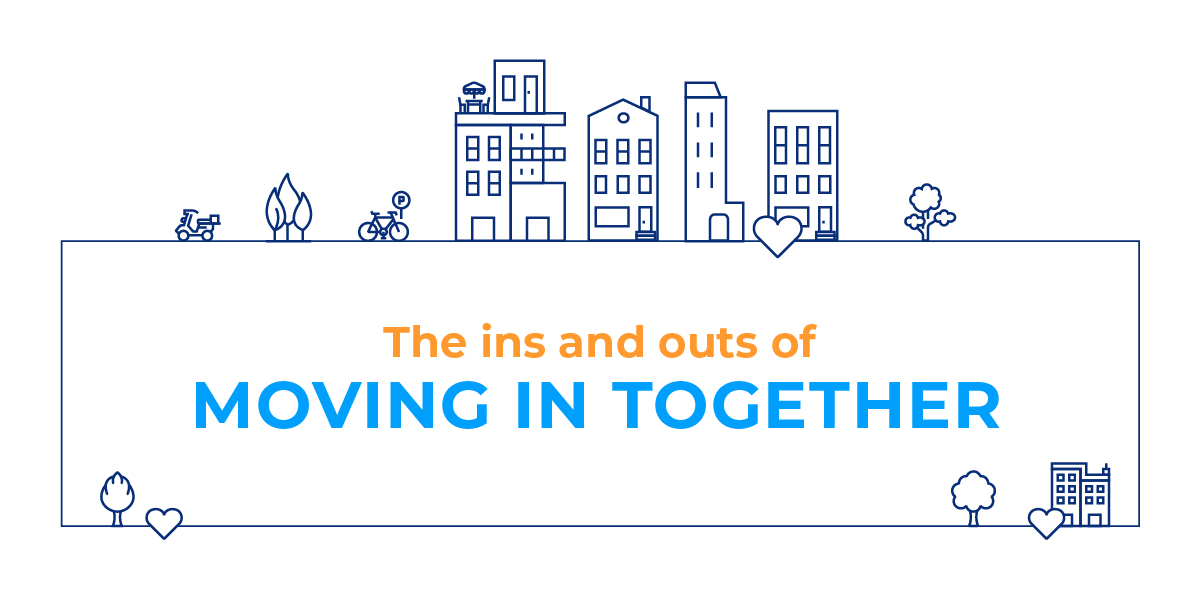 ApartmentAdvisor Moving In Together Survey

Moving in with your significant other is a big decision, both emotionally and practically. So, what do you need to know before you take that next step? And what are the keys to a successful live-in relationship?

ApartmentAdvisor surveyed 1,002 unmarried people who live with their significant other to get the real scoop on couple cohabitation.

The Decision to Move In Together 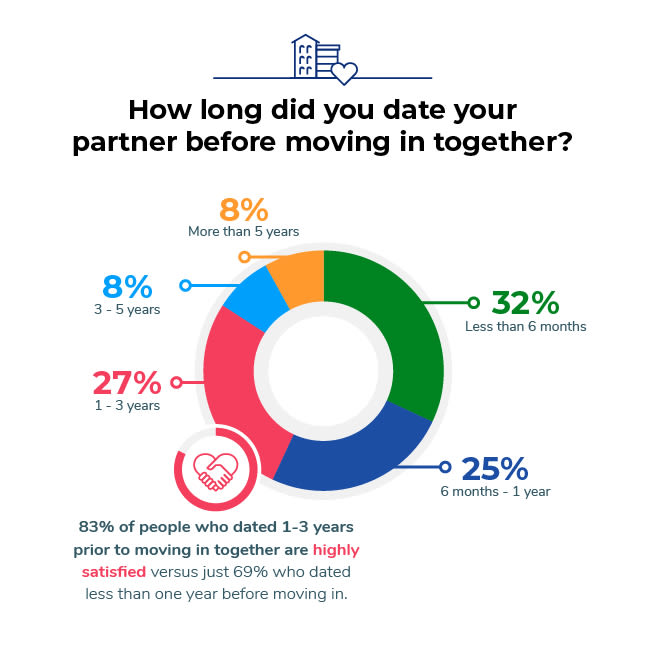 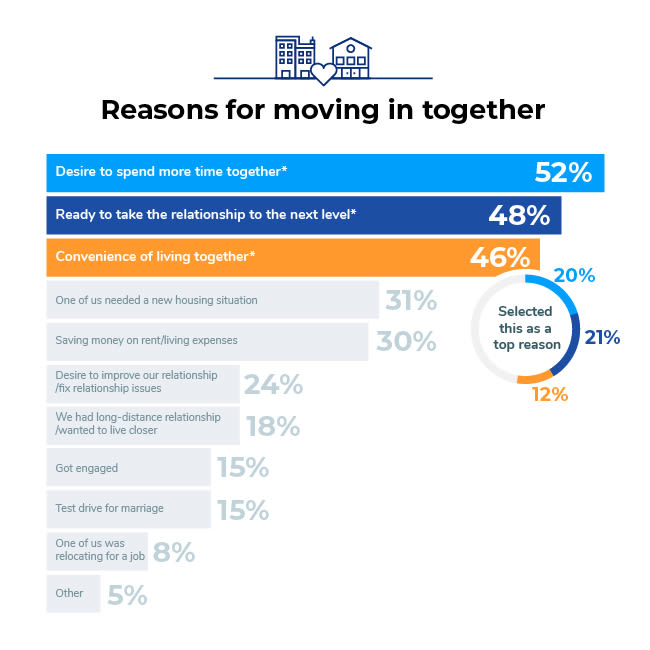 Moving in together is mostly about love, but convenience is a factor too. The most common reasons for moving in with a romantic partner are a desire to spend more time together and feeling ready to take the relationship to the next level. But nearly half (46%) of respondents also said convenience is an important factor. Notably, people who are highly satisfied with their relationship were nearly three times more likely to rank “taking their relationship to the next level” as their most important reason for moving in together.

First Comes Living Together, Then Comes…What? 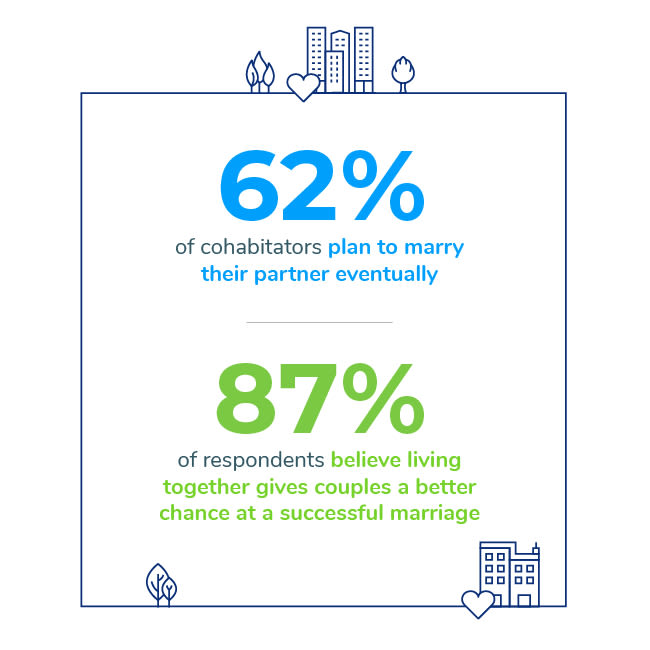 The majority of cohabitating couples plan to get married eventually. Although just 15% of respondents cited “getting engaged” as a reason for moving in together, it turns out that marriage is in the cards for nearly two-thirds (62%) of the cohabitators we surveyed. Thirty-four percent (34%) of respondents reported they are engaged to be married and 27% intend to marry their partner but are not yet engaged. Meanwhile, 21% are in a committed relationship with no plans for marriage and 14% have not yet discussed specific plans for their future.

Most people who live together believe cohabitation before marriage gives people a better chance at marital bliss. Eighty-seven percent (87%) of respondents -- including those who do not plan to get married -- believe living together gives couples a better chance at a successful marriage, a statistic consistent across age groups and genders.

Talking about your future relationship expectations before you move in is key to successful cohabitation. When we asked respondents to offer advice for other couples considering living together, one-third cited “communication about future relationship expectations” as most critical. Other top advice included not rushing into the decision and agreeing on how you will manage household finances prior to moving in together.

The Realities of Living Together 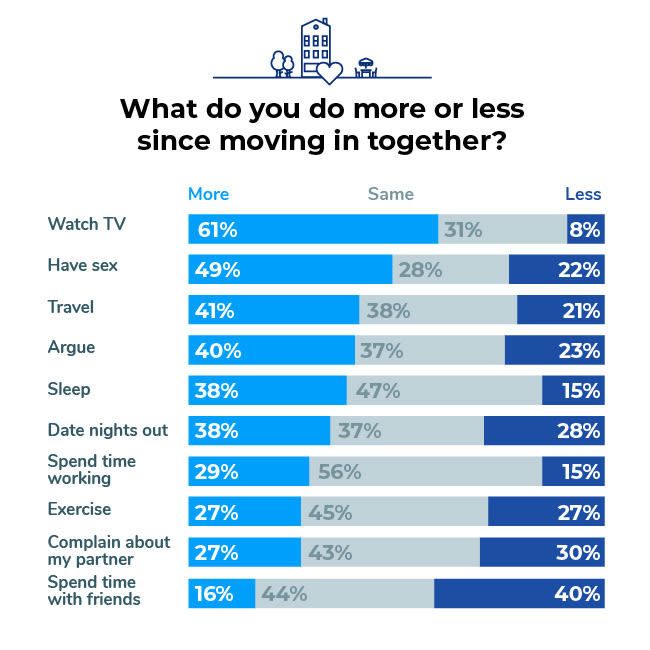 So, what's it really like to live with your significant other? It turns out cohabitating couples tend to argue more after moving in together. But they also have more sex! Also notable: respondents reported spending more time in front of the TV and less time with friends. 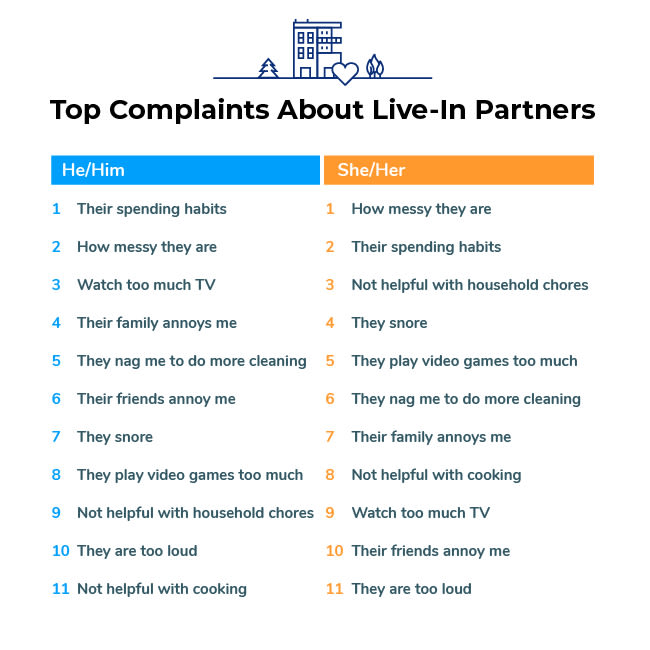 Spending habits and messiness are among the top two most common complaints people have about their live-in partners. Among the common complaints, spending habits, messiness, lack of participation in household chores and lack of help with cooking have the greatest correlation to relationship satisfaction. These complaints were more likely to be cited by people who are less satisfied. Notably, women are more apt than men to complain about their partner's lack of participation in household chores. 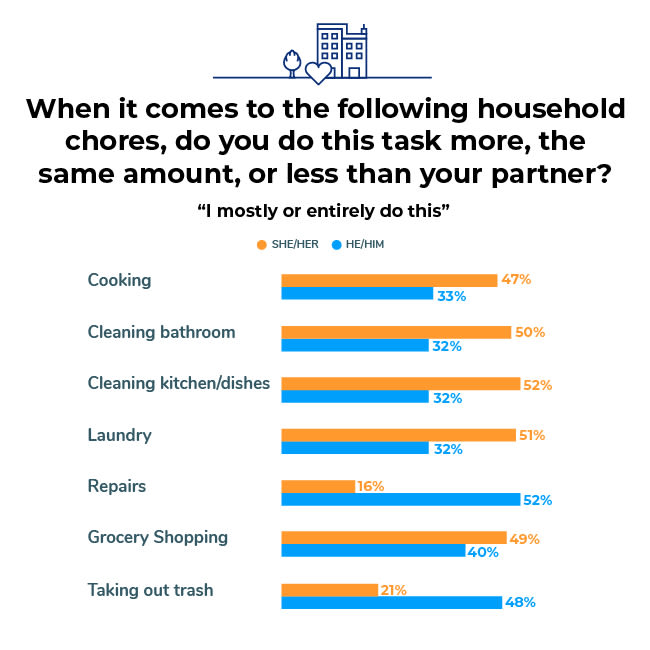 Equal division of household responsibilities drives relationship satisfaction. People who are highly satisfied in their relationship are almost twice as likely to split household chores equally with their partner than people who are less satisfied (47% vs 26%). Unfortunately, only around 40% of respondents reported equal distribution of responsibilities across most household tasks. And in cases where division of labor is not equal, women reported taking on the bulk of the household chores compared to men. (Note, the survey did not distinguish between same-sex or opposite-sex relationships.) 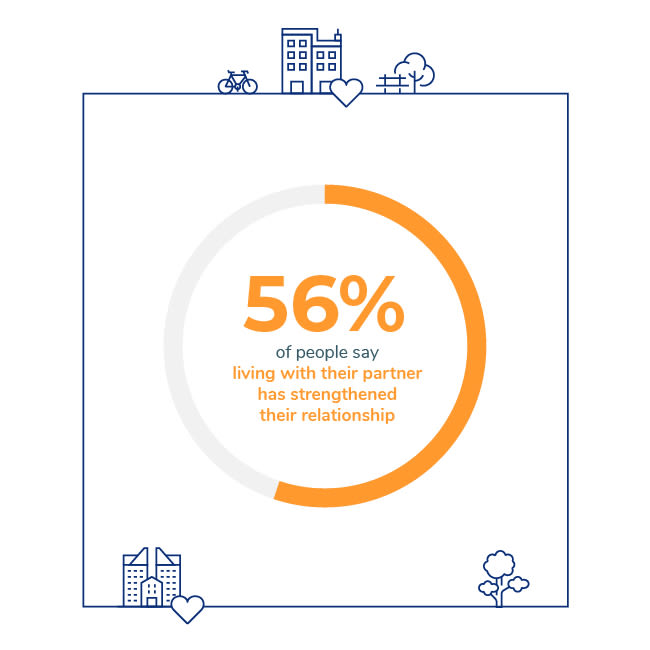 My Place or Yours? 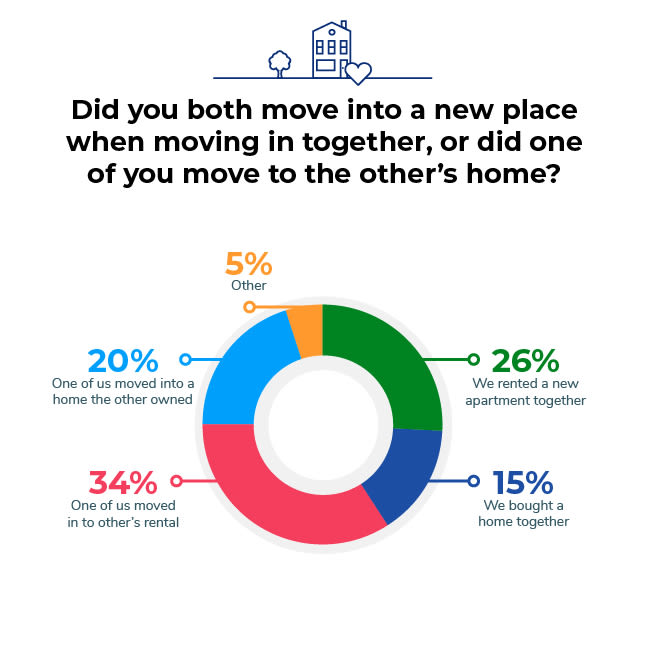 Respondents were slightly more likely (54%) to have moved in to one partner's existing home versus moving in to a new place together (41%). Sixty percent (60%) of people cohabitating with their partner rent their apartment, while 35% own. Not surprisingly, Gen Z respondents were more likely than other age groups to rent a new apartment together (34%), and Gen X were most likely to buy a home together (19%). 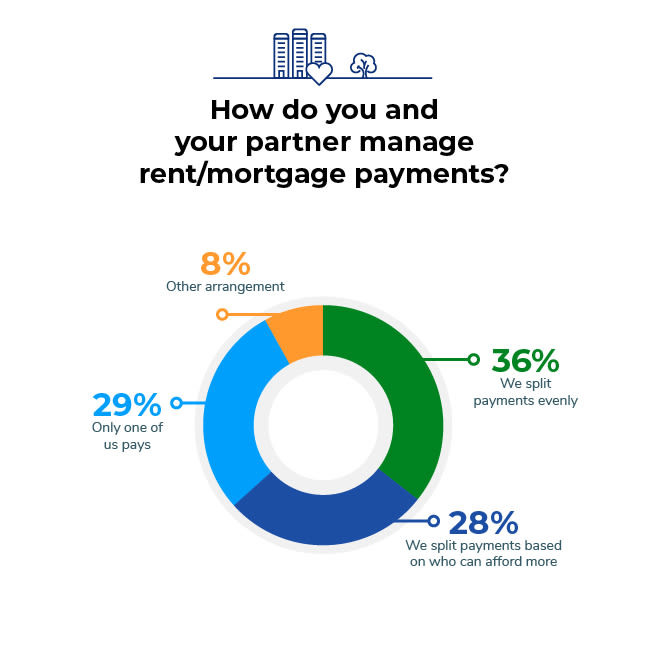 Cramped quarters cramp relationships. People who are highly satisfied with their relationship tend to say their house is the perfect size, while less satisfied people feel their home is too small. People sharing a studio or one-bedroom home with their partner are more likely to feel their space is too small for them, while people in two-bedroom homes are more likely to feel they have the perfect sized home.

We also asked respondents for their best advice for couples when choosing a home to live in together. Here are the top five recommendations: 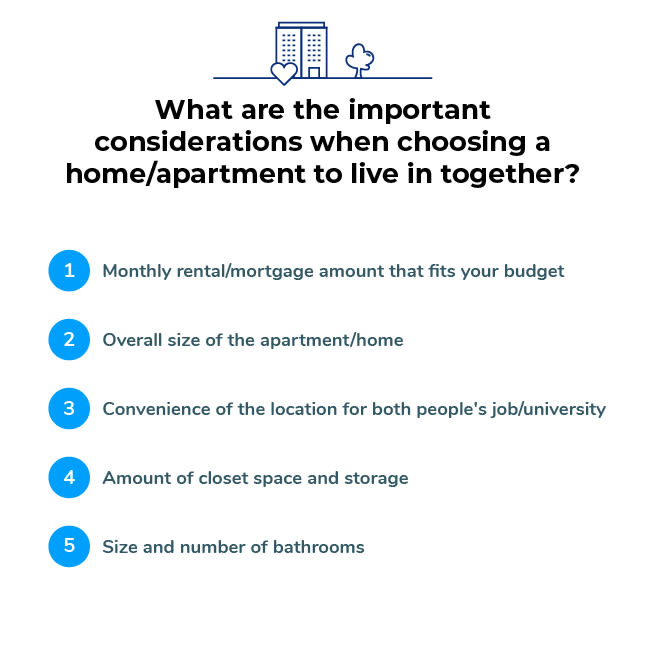 For the ApartmentAdvisor Moving In Together Survey, we surveyed 1,002 unmarried Americans who live with their romantic partner. The survey was fielded online the week of January 20, 2022, by Full Spectrum Insights through a Pollfish. The qualified sample was balanced according to U.S. census demographic, geographic and sociographic parameters.

Interested in using a stat or graphic from the ApartmentAdvisor Moving In Together Survey? All we ask is that you please link to this page.

Looking for a comment or more information about this report? Please email pr@apartmentadvisor.com. We’d love to hear from you!