View our guide for Midtown Miami 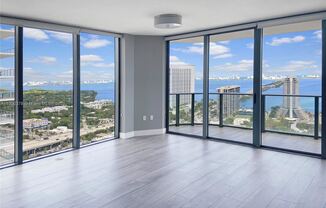 A 3 bedroom, 3 bathroom property. This property allows cats and dogs and has a washer & dryer, a dishwasher, and air conditioning. 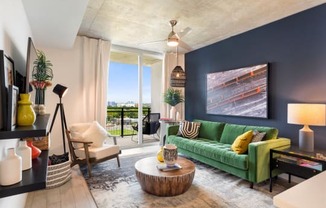 A 2 bedroom, 2.5 bathroom property with 2,177 square feet of space. This property allows cats and dogs and has parking.

Midtown Miami is, well, in the middle of it all. With the Miami Design District to the north and Wynwood to the south, Midtown is technically a part of the Downtown Miami neighborhood. However, because of its recent growth of businesses, housing, shopping, and entertainment, it has become a neighborhood in its own right.

The rise of Midtown came in the early 2000s, with New York City's SOHO neighborhood serving as inspiration. While the housing bubble in 2007 slowed progress on the project, today, the neighborhood is known for its high-rises, the Shops at Midtown, restaurants, bars, and boutiques. During Art Basel, Midtown hosts the Art Miami fair.

It's even home to a piece of Miami history: the iconic Bacardi buildings, formerly the site of the Bacardi liquor company's American headquarters. The blue-and-white tiled 10-story building and stained-glass annex went up in 1963 and 1973, respectively, and in 2018, they were added to the National Register of Historic Places. Nowadays, the Bacardi Buildings serve as the headquarters for the YoungArts Foundation, but locals tend to continue calling it by the name it went by for decades.

Renters will find that many of the apartments in Midtown Miami are located in high-rises, with waterfront complexes on the east side of Biscayne Boulevard offering expansive views of the bay.

When you live and work in Midtown Miami, it's easy to get around on foot or by bike. There is limited street parking in the Shops at Midtown, where some live in the high-rises, but shoppers and visitors can use the parking garage charging hourly rates. Many apartment buildings in Midtown Miami feature below-ground parking for residents.

In terms of public transportation in Midtown Miami, there are limitations, as many services go around instead of through Midtown and Downtown Miami in general. This includes the Metrorail, the county's heavy rail system. There are also proposals to extend the MetroMover, a free light rail, north into Midtown Miami and the Miami Design District. Miami's free trolley system and the Metrobus, however, do make stops in the area. The Brightline, an express train that goes to Fort Lauderdale, West Palm Beach, and soon Orlando, has a stop at MiamiCentral in Downtown.

When something is not accessible by foot, residents tend to drive their cars or hail a ride-share service.

The Shops at Midtown is the heartbeat of the neighborhood, with residents able to quickly walk to their favorite bar or restaurant. There are also some Midtown Miami restaurants located on bordering streets. A longtime favorite in Midtown is Sugarcane, and Wednesdays are the day to get deals on the mini sandwiches at 100 Montaditos. Other top picks include Little Hen, Maska Indian Kitchen + Bar, and Salvaje for its rooftop seating. There are also options outside of the shops, such as Morgan's and The Sylvester, and a few more blocks south are the array of dining and drink options in the neighborhood of Wynwood.

With the Shops at Midtown in the heart of the neighborhood, shopping options in this part of the city are plentiful. There is a large Target with a grocery store in the shopping complex, as well as Homegoods, Nordstrom Rack, Carter's Marshall's, and more. For grocery shopping in Midtown Miami, there's also Publix located a few miles south on Biscayne Boulevard. Closer by, you'll find smaller, local markets in Midtown Miami, as well. On the other side of I-195 is the Miami Design District, an area that has quickly grown over the last few years into a desirable shopping destination. High-end stores such as Tom Ford, Tiffany's, Cartier, Prada, Gucci and Creed have locations there, and of course, luxe home furnishings.

While the Bacardi buildings are now in use by the YoungArts Foundation, people still like to go by to enjoy the architecture. One building is adorned with a blue-and-white tiled exterior, giving it the look of Chinese ginger pots. The second building is covered in stained glass murals and is nicknamed "the jewel box." When standing between the buildings, be sure to look down; you'll find the Bacardi logo on the ground. Since being sold to the YoungArts Foundation, the organization has opened galleries inside the building for the public and has more plans for community art to take place.

There is a large, unadorned greenspace in the middle of the Shops at Midtown, where dog owners often let their furry friends explore on-leash (it is not fenced in). To the west is Roberto Clemente Park, named for the Puerto Rican baseball player; the park boasts basketball courts, a football and baseball field, picnic tables, shelters, chess tables, and other outdoor fun for visitors of all ages.

Thanks to the arts scene in nearby Wynwood, the action often spills over into Midtown Miami with pop-ups and street events. Residents can easily head to the artists' haven for its monthly art walk. During Art Basel, which takes place every winter, Midtown hosts the tented Miami Art fair. As the event grows larger and larger every year, some locals enjoy staying in Midtown rather than fighting the traffic and searching for parking in Miami Beach.

What is the average rent in Midtown Miami?

If you're apartment hunting in the Midtown Miami neighborhood of Miami, here's what to expect: the average rent in Midtown Miami is currently $4,200, with apartments ranging from $2,689 to $7,929 per month. There are more than 13 Midtown Miami apartments available for rent at this time. Prices vary depending on a variety of factors including apartment type, number of bedrooms, location, size, amenities, quality and more.

What is the average rent in Midtown Miami for a 1-bedroom apartment?