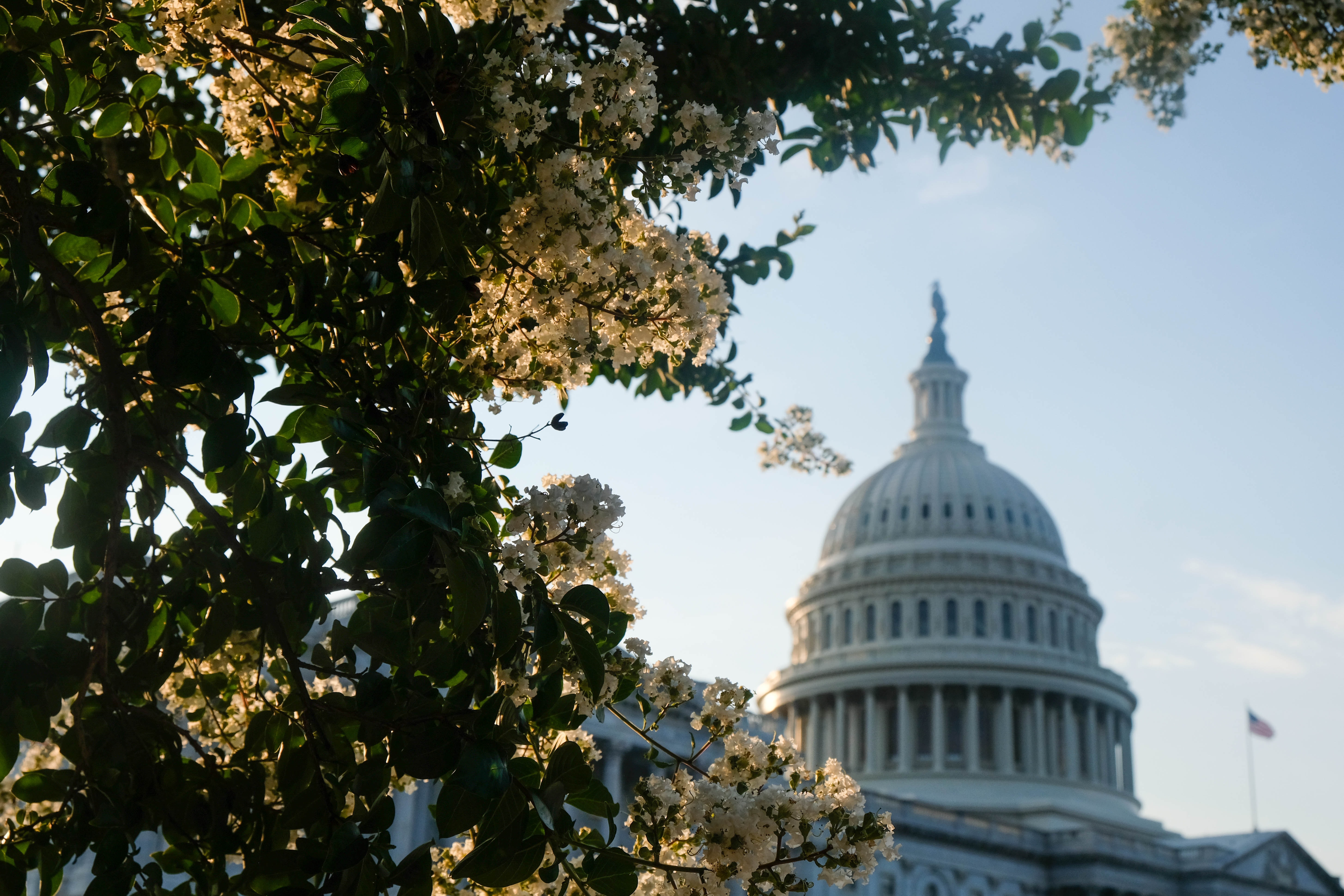 Not many people outside the Beltway know it, but Capitol Hill is so much more than government buildings — it’s actually one of DC’s largest residential neighborhoods. Once a sleepy area of Congressional boarding houses, Capitol Hill today is known for its lively shops, like Eastern Market, as well as some of the city’s best restaurants and bars, which stay open long after the bureaucrats head home.

The neighborhood begins at the Capitol itself, once a woodland hill that architect Pierre L’Enfant called a “monument without a pedestal,” forever changing the landscape with his iconic design for the US Capitol Building, which opened in 1800. The magnificent Neoclassical building would inspire countless imitations at statehouses around the country, not to mention millions of selfies from nearly every sightline in the city. Flanking the Capitol are its neighbors on First Street: the elegant Library of Congress and the regal US Supreme Court buildings, both of which are lofty in stature; some buildings encompass entire blocks.

Enlivening the area are the busy storefronts and restaurants along Pennsylvania Avenue, as well as the many side streets filled with Federalist, Georgian, and Queen Anne townhouses. While some of these charming homes are privately owned, many contain subdivided units popular among renters. Apartments in Capitol Hill can also be found in buildings scattered throughout the neighborhood. Popular with well-educated young professionals, Capitol Hill is an ideal place to live for those working for the federal government. It is for this reason that the neighborhood’s population changes like clockwork every four years with each election.

Capitol Hill’s boundaries include the National Mall to the west, G Street and Benning Road to the north, the Anacostia River to the east, and I-695 to the south.

One of the busiest train stations in the country, Washington Union Station, is Amtrak’s headquarters as well as a rail hub for travelers along the East Coast. Trains regularly depart for New York City, Boston, and Miami, as well as Chicago and other destinations in the midwest and south. The MARC and VRE commuter trains stop at the station before traveling on to suburban Maryland and Virginia. On its lower level is a WMATA Metro Rail station, which offers Red Line service to Metro Center as well as other stops within DC. Union Station also offers a large parking garage (daily rates aren’t cheap), and it has a bus terminal which is served by WMATA Metrobuses, the DC Circulator, Bolt, Peter Pan, Megabus, and Best Bus lines. Meanwhile, the Greyhound station is just a block further down the street on Massachusetts Avenue. Be sure to stop and look up on your way in; Union Center’s beaux-arts-designed arrival hall was recently restored to beautiful effect. The WMATA MetroBus Routes B2, X2, X8 X9, 30N, 30S, 32,36 80, 90, 92 roll through Capitol Hill, mainly along Benning Road and Pennsylvania Avenue, as does the DC Circulator.

With so many mass transportation options, you may prefer not to get behind the wheel of a car here. Still, if you must drive into Capitol Hill, there are public lots throughout the neighborhood, such as the surface lots by Eastern Market on Pennsylvania Avenue and on 8th Street by Barracks Row.

Sure, the Capitol Building has a cafeteria, but why eat there when there are plenty of other great restaurants in Capitol Hill?

We, The Pizza and sister restaurant Good Stuff Eatery are the closest dining establishments to the Capitol. They’re great fast-casual lunch spots from celebrity chef Spike Mendelsohn, who was featured on the Food Network’s Iron Chef competition. His menus are overflowing with burgers, salads, pizzas, chicken tenders, and milkshakes — all the things the whole family will enjoy. The original location of comfort food mecca Ted’s Bulletin is still serving its delicious all-day breakfasts on Barracks Row. Try the heavenly French Toast or the Big Breakfast Platter; the peanut butter burger is said to be a hangover cure. For award-winning European flavors, head to Ambar Capitol Hill. Standouts include roasted mushroom crepes, drunken mussels, and savory pies filled with meats and cheeses. It recently underwent a renovation that doubled its size and added a lovely rooftop bar.

Barracks Row is known for its convivial atmosphere and patio-lined restaurants, and Belga Café is one of the best. Known for its brunches, and in particular, its Belgian waffle menu, which features everything from French Toast brioches to Liege waffles topped with poached pears. Rose’s Luxury is helmed by Aaron Silverman, one of the city’s most creative chefs. He was the first to pioneer a no-reservations policy (diners would patiently wait hours in a line that would snake down Barracks Row.) His menu is just as inventive, pairing Asian, Southern, and French flavors in dishes like hot chicken spiced with black pepper and served with a pineapple aioli on toast.

Valor Brewpub is a Capitol Hill brewery owned and operated by veterans. In addition to its Commandants Kolsch ales, hoppy IPAs, and Bomber’s Belgian Ales, it has a menu of craft cocktails, as well as a selection of lip-smacking BBQ ribs, sandwiches, and burgers to fill your belly.

Each of District Donut’s fried confections begins with a ball of house-made vanilla bean yeast. Flavors may change with the season, but their insistence on quality ingredients never changes — and you can taste it in every bite.

Specialty roaster Peregrine Espresso has been serving fine coffees in Capitol Hill for over a decade. It offers single-blend and seasonal roasts, flash-brewed iced coffees, hot chocolate made with Omanhene cocoa beans, and Rishi teas.

The neighborhood’s nightlife scene begins — or maybe ends — at Mr. Henry’s, a Victorian gastropub known for its nightly live music with an emphasis on jazz. Fun fact: Tori Amos got her start playing piano here in the 1990s. The Hawk N’ Dove has a lovable divey vibe, TVs tuned to sports, and pool tables where politicos from both sides of the aisle are known to cut loose. You might even spot an off-duty Congressman. Just look for their lapel pin.

A neighborhood landmark, as well as the name of a Metro stop, the historic Eastern Market is a public market housed in a beautifully restored 19th-century building. It’s where you can find fresh pastas, fine deli meats and cheeses, farmstand produce, and even flowers. A fire nearly destroyed the market in 2007, but it rebounded and reopened two years later. Its weekend flea market is among the best in the DMV region and features more than 100 antiques, vintage clothing, and crafts vendors.

For a while, it was uncertain whether Fragers Hardware, the neighborhood’s oldest retailer, would reopen. The century-old business also suffered a fire, this one in 2013, and took six years to reopen, but thankfully it did, and it’s thriving today as part of the Ace Hardware empire.

Other shops along Pennsylvania Avenue range from boutiques like Fairy Godmother, a children’s costume shop and toy store, to East City Bookshop, known for its author events. Woven History & Silk Road has been selling custom Middle Eastern and Asian carpets on Capitol Hill since 1995, while a few streets away, Antiochia Linens sells fine Turkish tableware, towels, and bedding. There’s also a Sephora on Pennsylvania Avenue.

Small specialty retailers can be found along Barrack’s Row, like Howl to the Chief, a pet store, Summit to the Soul, which sells yoga apparel and other athleisure wear. Rounding out the list is an art gallery, Psilo Gallery, and a women’s clothier, Bitter Grace.

Grocery stores in Capitol Hill range from the small, locally-owned Yes Market to Trader Joe’s and a Harris Teeter.

No visit to Capitol Hill is complete without a tour of the US Capitol Building. Free guided tours are available by visiting the Capitol’s website or by contacting your Congressman or Senator. In addition, a few same-day tickets can be reserved at the lower-level Information Desk at the Capitol Visitors Center. 90-minute tours take visitors through the crypt, the Rotunda, and Statuary Hall. (Separate tours cover the House and Senate chambers, where lawmakers meet.)

As the highest court of law in the land, the US Supreme Court gives the final verdict on hotly contested cases. Building tours are given by knowledgeable guides; sometimes, when the court is in session, Justices even greet visitors.

With a collection of more than 140 million books, the Library of Congress is the largest library in the world. Guided and self-guided tours are available, and must-see stops include the gorgeous Great Hall and the Main Reading Room. The Library really does provide information to Congress; in 2020 alone it responded to over 800,00 requests for written research materials. In addition to serving as a research center, it hosts free concerts, lectures, and frequently changing exhibitions.

Another great way to explore Capitol Hill is by taking a walking tour of the neighborhood. The Capitol Hill Restoration Society offers tours of the neighborhood’s historic sites, including the area’s oldest home, called The Maples, which was a Georgian estate built in the 1790s. The Society also hosts a popular Mural Tour of Capitol Hill. Both tours are available on Eventbrite (and often sell out quickly).

You can stretch your legs in one of the neighborhood’s many parks, starting with The National Mall on its western edge. Known as “The Nation’s Front Yard,” the National Mall boasts more than 1,000 acres of public greenspace and is ringed by popular paths for walking and biking. The museums of the Smithsonian Institution line its edges, and the Lincoln Memorial sits at its southern edge. Other parks in Capitol Hill include the lovely Folger Park, which has more than 1,000 ornamental trees, the dog-friendly Spirit of Justice Park, which is located on top of a parking garage, and Stanton Park, by Union Station, which is especially picturesque during cherry blossom season.

The Georgetown University Law Center is located in Capitol Hill, just a short walk from Union Station. This area is home to grad students, young professionals, and interns from nearly every state who flock to prestigious positions at the US Capitol.