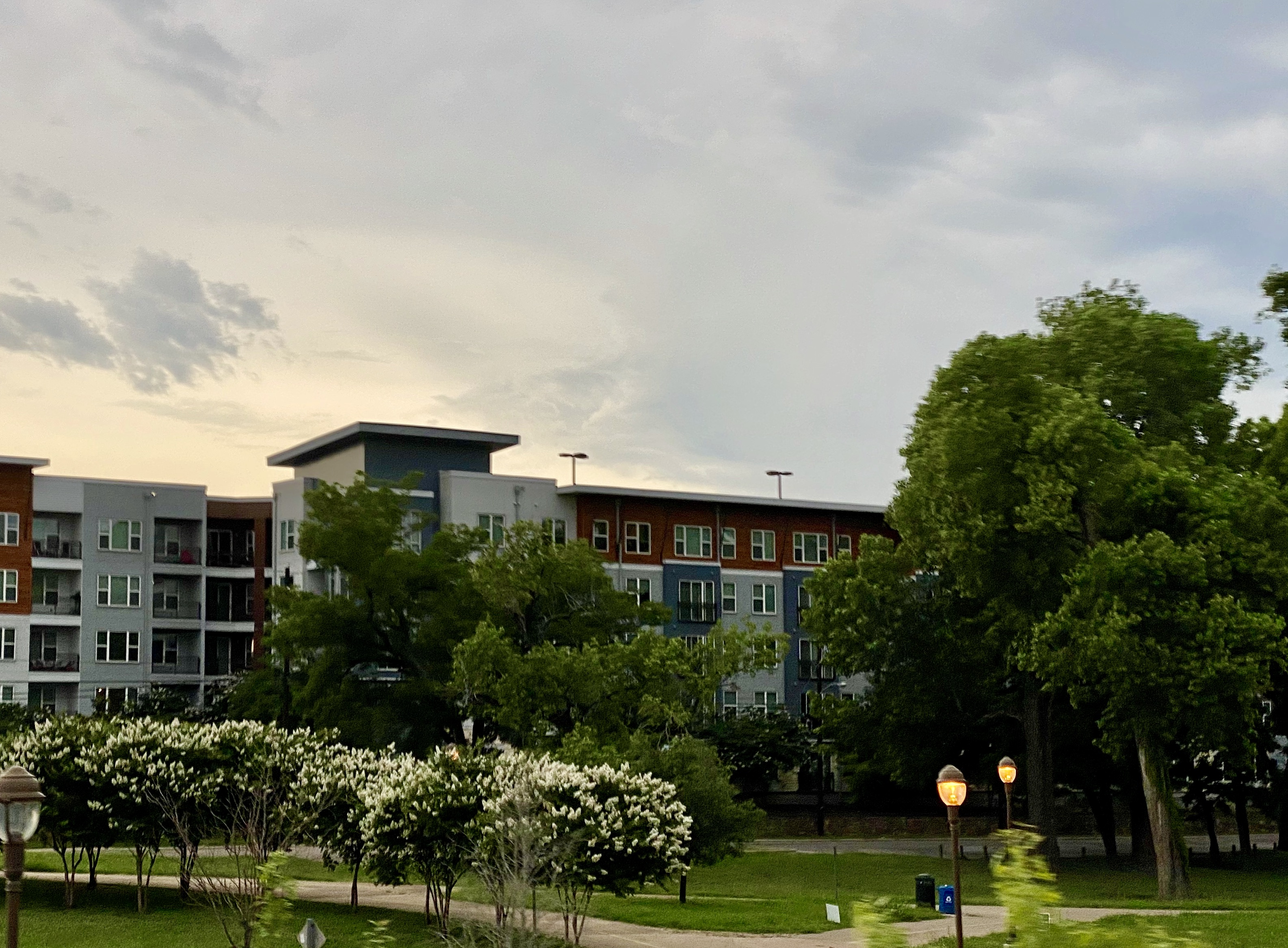 Less than a mile to the north and northeast of White Rock Lake, the Lake Highlands neighborhood is one of the most beloved in the city covering a 15-square-mile swath of northeast Dallas. Add another square mile in adjacent Old Lake Highlands, and you’ve got yourself one truly expansive territory. A primarily residential area with a distinct feeling of community, Lake Highlands is dominated by subdivisions and smaller neighborhoods, each with apartments at every possible price range. Of course, without nearby White Rock Lake, the neighborhood would simply be called “Highlands.” While Lake Highlands has its fair share of restaurants, bars, and shops, the main attraction for those visiting the neighborhood is the nearby lake.

The area also boasts one of the largest green spaces in Dallas. The entire eastern border of Lake Highlands is home to towering trees and rolling hills, with paved trails and White Rock Creek rambling through bucolic scenes that you don’t often find in a major metropolitan area. Because of this perk, the residents of Lake Highlands tend to lead active lifestyles, taking full advantage of numerous recreational opportunities right outside their door.

Another big selling point of the vast Lake Highlands area is its large number of Dallas Area Rapid Transit (DART) light rail stations. Several can be found directly in or very close to the neighborhood, including White Rock Station, Lake Highlands Station, LBJ/Skillman Station, and Forest Lane Station. The parkland areas and accompanying trail systems make this neighborhood extremely bikeable. You’ll also see plenty of people walking and jogging for leisure or fitness, but running daily errands in this area is easier done by car or public transportation.

Lake Highlands is intersected by Interstate 635 (LBJ Freeway), running southeast to northwest. While that’s the only freeway within the neighborhood’s borders, I-30 (East R.L. Thornton Freeway), US-75 (Central Expressway), and Loop 12 (Northwest Highway) can all be accessed within 15 minutes of nearly any point in the Lake Highlands.

Lake Highlands has an abundance of grocery stores including major brands such as Kroger and Tom Thumb, as well as specialty stores Sprouts Farmer’s Market and ALDI. Another selling point is the wealth of international grocery stores, including African Food Depot, La Michoacana Meat Market, Hong Kong Market, Shee Ethiopian Grocery, World of Spices, and Zee International Store, making it easy to discover new foods or cook authentic dishes with hard-to-find ingredients from other cultures right in your own kitchen.

Or if you prefer letting someone else do the shopping, cooking, and cleaning, locally owned and operated restaurants in Lake Highlands and Old Lake Highlands run the gamut of cuisine styles. Relaxed, casual vibes are the norm for eateries in this neighborhood, with a reputation for offering plenty of bang for your buck thanks to large portions and fair pricing.

After visiting the lake or taking a hike along one of the local trails, several barrooms await to draw an ice-cold beer from the tap, shake up a classic cocktail, or pour a glass of wine suited to your specific tastes. Lake House Bar & Grill, BarNone, District 9 Draft Haus, Goodfriend Beer Garden & Burger House, and La Caveau Vinotheque each offer friendly service and some of the best boozy beverages in the area. When the sun goes down, you won’t find nightclubs here, but well-loved dive bars King’s X, O’Riley’s, and One Nostalgia Tavern deliver unpretentiousness with a healthy dose of laidback fun. And if you wish to imbibe right where the stuff is made, then look to Oak Highlands Brewery and Vector Brewing to quench your thirst with one of several craft beers brewed on-site.

Besides grocery stores and a handful of big-box retailers, including two Target stores less than a mile apart, Lake Highlands features mostly small strip centers with a handful of non-restaurant retailers and service providers. Among the newest in the area, Lake Highlands Town Center, is one of the only mixed-use developments including apartments, shopping, and dining options all on one corner. If you’re in the mood for a shop ’til you drop, your best bet is to head to nearby Uptown or North Dallas.

Nature rules in Lake Highlands. Therefore, many activities center around spending time in the great outdoors. Flag Pole Hill, named appropriately due to its large American flag-clad centerpiece inside the park, falls right about the point Lake Highlands and Old Lake Highlands meet. The popular gathering place has terrific views of White Rock Lake from a scenic overlook, and, on the rare snowy day in Dallas, it’s one of the best places in the entire region to feel like a kid again and race downhill on a sled.

The 1250-acre White Rock Lake is hands-down the top attraction for residents and visitors alike. Several smaller parks, sports fields, fishing piers, super-wide pathways for cyclists and pedestrians, and unpaved hiking paths all draw hundreds of people per day. Sunsets from the shores near Winfrey Point are nothing short of spectacular with views of the Downtown Dallas skyline in the distance. In the same area, but accessed from Garland Road, the 66-acre Dallas Arboretum features beautiful gardens, restaurants and cafes, and Thursday night concerts on the lawn in spring, summer, and fall. White Rock Paddle Co. rents kayaks and standup paddle boards, as well as other gear for fun on the gentle waves. Bath House Cultural Center, also on the lake’s shores, features live performances and art exhibits throughout the year. And White Rock Dog Park, with separate lakeside areas for both large and small dogs, always attracts a crowd of canines and their human companions.

Elsewhere in Lake Highlands, Topgolf, the high-tech driving range, restaurant, and bar, welcomes scores of area residents and visitors to chill for a few hours, mainly on the weekends. And a couple of blocks away, Alamo Drafthouse Lake Highlands, the movie theater with its popular no-talking, no-texting policy during screenings, lures people for date nights or outings with friends over in-theater dinner and drinks.

No colleges or universities can be found within Lake Highlands proper, but Southern Methodist University (SMU) lies less than 5.5 miles from most the central point of Lake Highlands, making this a popular neighborhood for students who are willing to trade proximity to campus for more affordable rental options.